The Whittier Mascots have been training especially hard over the past few months and are ready to reclaim the National Title at this year’s “Jamz National Cheerleading Competition” taking place Friday, January 25, 2013. We had the pleasure of screen printing the t-shirts they will be wearing at the competition and even re-created their team logo. They wanted a logo that showed their toughness in this competition yet still embodied a certain sense of femininity for the young girls. We at EC thought a new spin on the iconic skull and cross bone would be perfect for this event (As pictured below). Printed on black AAA t-shirts in maroon and athletic gold ink, the design and printing brought together a combination of a pretty little skull for the girls and a tougher version of the skull for the dad’s and brothers of the teammates to wear which only proves to the competition at the Nationals that The Whittier Mascots are in fact a force to be reckoned with.

Taking home first place just two years ago, victory is something that is very familiar to this cheerleading squad. Coach Kristina Uribe is excited to display her team’s hard work in this year’s competition and says, “We are are ready to compete for another national title in Las Vegas this year.” We wish the Whittier Mascots the best of luck during their competition and regardless of the outcome; they are winners to us, Go Whittier Mascots!! 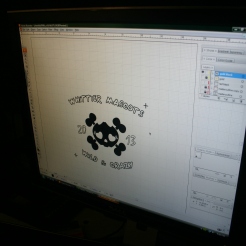